In light of the Big Ten's decision to restart the football season on October 24th after cancelling due to coronavirus concerns, college football fans in Wyoming now await what the Mountain West Conference will do. The league cancelled fall sports back in August but it appears that there is movement for a re-start. Commissioner Craig Thompson tweeted this: 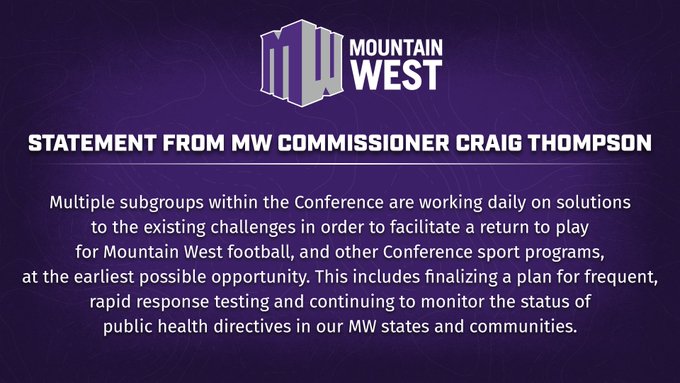 In other words, the league is working on it. Then Brett McMurphy of the Stadium added this bit of information through Twitter.

This would allow league to be eligible for NY6 bowls. Not all schools might play w/Hawaii, Fresno & Air Force biggest unknowns for full season.'

Now Air Force is scheduled to play two games this season against the other Service Academies as part of the Commander in Chief's trophy series. The Falcons will play Navy on October 3rd and Army on November 7th.

Meanwhile, California's governor has lifted health restrictions that have prevented football teams from practising, essentially leaving that decision to local health authorities. That is a major step forward for the Mountain West Conference which has 3 California schools and the Pac 12 Conference which has four.

So it appears that the wheels are spinning for a return to play in the Mountain West.

Enter your number to get our free mobile app

LOOK: Casper Landmarks THEN vs. NOW; History in Photographs

LOOK: Casper Landmarks THEN vs. NOW